I've got the kind of PF that hurts like hell in the heel.  It's chronic.  The pain started, I think, back in 2009.  Since then, it's been pretty constant, albeit with different degrees of discomfort.  I thought I'd kicked it last year in the lead up to the Leadville 100.  For the month or two leading up to the race, I'd been running pain-free.  During the race and post-race, nada.  All good.  Then, in November, I did a speedwork session at the Evergreen High School track and that was it.  The PF was back, with a vengeance.  I guess the hard forefoot running stretched something out...fiercely.

Since then, it's been a balancing act...how far...how hard can I run without making my right heel scream at me.  Lately, it's not taken much to really make the heel mad.  Today, the limit was 12 easy trail miles.  Frustrating.

I've got the PF that hurts like hell in the heel.  I know I have a heel spur, which certainly is part of the problem.  (See below...thanks for the pic Wikipedia).  On top of that, favoring the sore heel on the right, I think, is causing me to alter my gait enough to make my left Achilles ache.  Sigh. 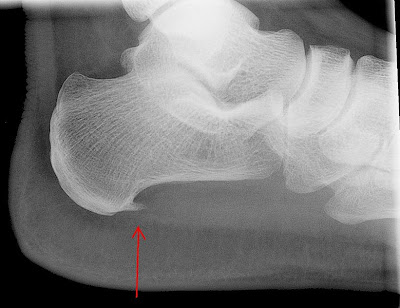 So what sort of complex PT routine am I doing for my PF?  Not enough, it seems.  I've been sleeping some nights in an immobilization or night boot, an annoying device meant to keep your foot flexed while you sleep under the theory that a flexed plantar will heal better.  This has helped before, but doesn't seem to be doing the trick now.  I rotate between Saucony Peregrines and Hoka Stinson Evos.  Other than that, I'm not doing much.  I did take about a month off around Christmas.  During that time, the heel felt fine.  At least it did until I ran again.

As a result, I've gotten pretty good at 10-mile runs.  I haven't run more than 20 miles in an outing since December.  Another frustrating thing is that while the heel kills post-run, it typically feels OK the next morning, that is until I run again.  I don't hobble around all day before running.  So, I tend to under-treat the injury. Maybe it will just go away again, the way it did leading up to Leadville.

But, it's time to start taking this thing more seriously, that is if I want to run anything longer than 10 miles in a stint this summer.  I reckon it's time to throw everything at the problem...icing; night boot; rolling the foot/heel with a hard, spiky plastic ball; NSAIDs; and anything else I can think of.  The problem is, I lack motivation.  I hate babying injuries. I don't like to think about chronic injury. I just want to run.

Yeah, yeah, I know there's a causal relationship between taking care of injuries and being able to "just run."  I'm impatient, and I need to get over said impatience.

And, I'd better hurry (there's that impatience thing again).  Summer's coming.  That's the time of year when the pull to "just run" is strongest.